Home » Blog » ChicPeaJC Confessions as a Mom » “We love Boobies” Chicpea’s Breastfeeding Story. SHE TELLS IT LIKE IT IS! 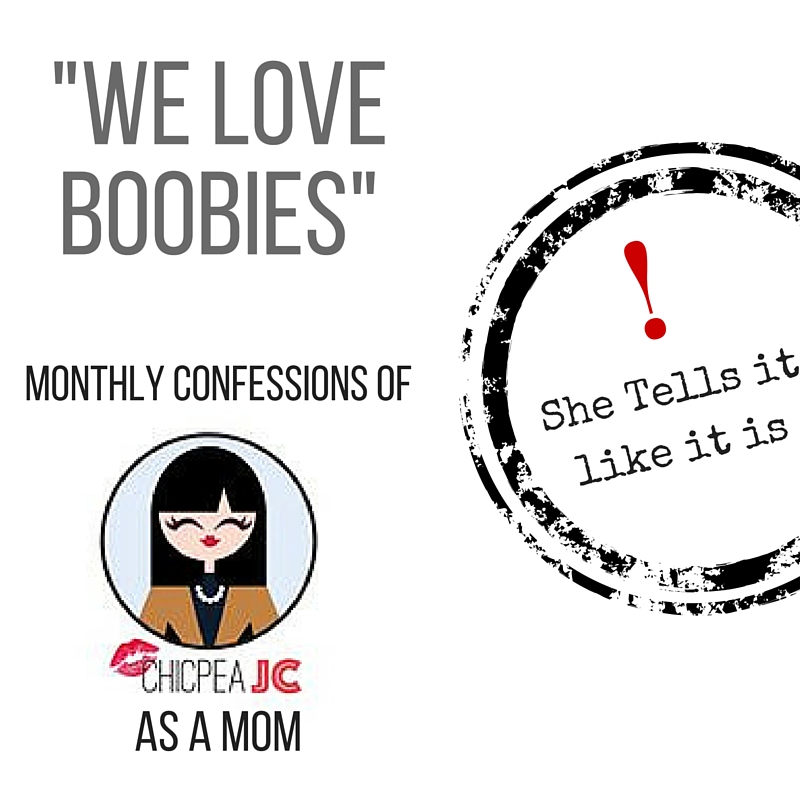 As some of you may have read my birth story, the next post is a continuation of the trials and tribulations of becoming a new parent. I tell it like it is!! As mentioned in the previous post, I was really determined to breastfeed my “Mini-me.” Even though it wasn’t really a “thing” in my family.

I remember when I asked my sister once why she didn’t want to breastfeed to which she said to me “It’s just not natural”  WHAT?! so having dudes grope your boobies to get off is?! How is doing the thing your breasts are designed biologically to do, unnatural? Humans were meant to drink human milk, and formula is made from cow’s milk.I don’t blame her for reacting that way. This is the problem with society and I need to vent about this.

It’s cool for chicks to walk around half-naked or take “butt selfies” (which is totally cool, not against it and maybe I do from time to time. FOLLOW ME @chicpeajc 😉 but it’s not okay for a mom to feed her child from a boob in public. Really?! Really.

I know this topic has been exhausted in the media but I find it completely crazy that breastfeeding is still totally not accepted by the mainstream. That moms have to cover themselves when trying to feed their human child because it makes others uncomfortable.

First, it is by LAW permitted for a woman to breastfeed anywhere she wants. The rates are steadily improving and the topic has gone from being a “lifestyle issue” to a “public health issue.” So now you have the federal government recognizing that we spend upwards of $13 billion per year in costs related to formula raised sicker babies & children, yet the public still has a problem accepting woman nursing in public or taking time at work to pump for her baby.

After I had Mini-me I had major difficulties breastfeeding. For about 3 months I had to use nipple shields (which protect that tender tissue) and I had to pump all the time like a crazy woman. Breastfeeding does not come easy for everyone and whether you tried to or not doesn’t make you a better or worse mother. No judgment zone, we all do what we can.

Anyway, I remember the first time I ventured out with my baby in public and it was time for her to eat. It was probably the most stressful moment of my life. I remember she was crying her eyes out, I was trying to put the nipple shield and also figure out how to use the breastfeeding cover-up… the whole experience was awful and traumatizing. I remember thinking to myself, why am I using this cover-up? Is it to make sure people around me don’t get uncomfortable with maybe seeing a nipple? FUCK THAT. It’s a nipple people. We ALL have them! The cover ups are just not cute and never matched my LOTD (look of the day)

I came home and immediately put the cover-up in storage.  I decided that I am going to feed my kid wherever and whenever she wants and I don’t care who I offend; that’s their problem.

I remember once I was carrying Mini-me on my hip and ran into a friend on the corner of Grove and Christopher Columbus (which is very high traffic). Mini-me puled down my shirt, exposing me to all of Jersey City. When my friend finally noticed she said, “Lynn, your nipple is hanging out!” I just shrugged and continued my conversation. Why are people so afraid of seeing nipples?! We all have them!

The moral of this post is. Breastfeeding can be really hard, it’s exhausting, it’s challenging but it’s also really good for babies, and boobs have dual usage – they’re nice to look at, great to feel, and superb at providing complete nourishment for a growing human!

We love boobies. I sure do.

FOOTNOTE:  If 90% of US families could comply with medical recommendations to breastfeed exclusively for 6 months, the US would save $13 billion per year in healthcare costs and prevent an excess of nearly a thousand deaths annually. Current US breastfeeding rates are suboptimal mainly due to lack of support culturally and the high percentage of women returning to the workplace 12 weeks after birth. [from the official journal of the American Academy of Pediatrics, April 5, 2010]